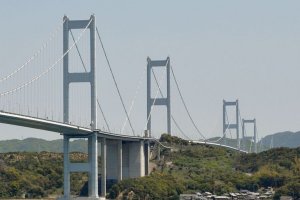 Traversing Kurushima Strait to connect Oshima Island (a part of Hiroshima prefecture) to mainland Shikoku, the Kurushima Kaikyo Bridge is the world’s longest suspension bridge—it actually consists of three consecutive suspension bridges spanning a cluster of lush islands. With a structure evocative of the Golden Gate Bridge and at a staggering height of 4000 meters, it offers unmatched views of both coastal mountain ranges and the sea. It is part of the Shimanami Expressway, which runs from Hiroshima prefecture in Honshu to Ehime prefecture in Shikoku, but the bridge has lanes for mopeds and bicycles. Whatever time of day it is, and whatever the weather conditions, this dual land- and seascape proves otherworldly: on a sunny day at noon you’re struck by the bright green of the islands dotting the sea and sky; at night an illuminated bridge takes on an orange-red hue and casts light on the water; a warm-toned sunset bathes both the distant islands and traveling vehicles in shadow.

For those who want a more intimate experience of this area, you can take a 40-minute boat tour of the Kurushima Strait, famous for its whirling tidal currents; a peaceful boat ride can become something more like white-water rafting. At this level, while you endure the fierce motions of the sea you near the towering suspension bridge, the various islands and the shipyards of Imabari, the second-largest city in Ehime. For cyclists on the bridge, the twisting path makes for an unforgettable ride. There is even a spot where you can pull over and take in the maritime view. After making it to Oshima by car, bike, moped or boat, you can stop by Mukuna Fisherman’s Wharf, where you can see the bridge in its entirety, or even climb Mount Kiro for an even more breathtaking scene.

There is no better way to see the Kurushima Kaikyo Bridge and its stretch of the Seto Inland Sea than from the top of Mount Kiro, at the southernmost..

Protruding from a concrete landscape—one of the tallest things in sight—is Imabari Castle, in the coastal city of the same name. This structure is..