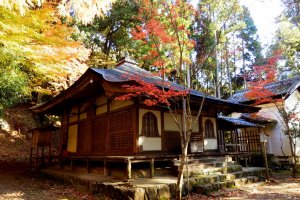 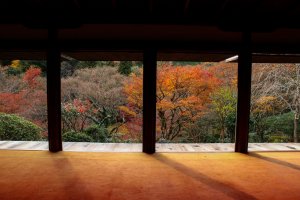 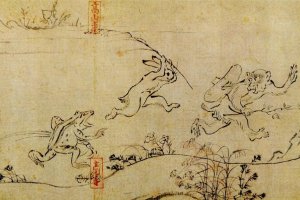 One of Kyoto’s most secluded UNESCO World Heritage Sites, Kosanji Temple is located within a lush mountain forest. Kosanji is a Buddhist temple belonging to the Shingon Buddhism sect. From within the temple grounds, the magnificent view overlooking the Kiyotaki River valley is a sight to behold. For those who wish to escape the crowds of the city, Kozanji Temple is a perfect half-day trip from Kyoto.

Kosanji Temple is believed to have been built during the 8th century, and was rebuilt and restored by Shingon monk Myoe in 1206. It is dedicated to the worship of the Shaka Nyorai Buddha. The contributions made by Myoe were a significant part of Kozanji’s history, as he helped revive the temple which was subsequently used as a training hall for the Kegon school of Buddhism. Myoe also planted several tea plants across the temple grounds, which helped spread the practice of tea cultivation throughout Japan. Kozanji’s tea fields are one of the oldest tea fields in the country — its first seeds sown were specially brought over from China by a high priest Eisai in the 1100s. To honor Myoe’s contributions to Kosanji, a carved wooden statue of him is housed within one of the temple halls.

Several of Kosanji’s original buildings have been destroyed by fires, the only remaining one being the Sekisui-in; one of the last Kamakura-period buildings in Japan. The other buildings have since been rebuilt and restored to resemble their original facade. Kosanji originally houses several 'National Treasures' and over 10,000 'Important Cultural Properties', most of which are loaned to museums in cities such as Tokyo and Kyoto.

Often regarded as the ‘First Manga', these painted scrolls are called the “Scrolls of Frolicking Animals”. Drawn sometime during the 12th century, the identity of the artist is unknown but speculated to be the monk Toba Sojo. The painted scrolls depict a satirical story mocking the daily lives of priests, likening them to animals. The original scrolls are displayed at the Tokyo National Museum, but you can view a replica at the Sekisui-in hall at Kozanji.

The last remaining original structure in Kozanji, Sekisui-in was rightfully designated as a 'National Treasure'. It is one of the last remaining Kamakura-period buildings in all of Japan, most of them having perished to fires or other forms of man-made destruction over the years. Sekisui-in used to serve as a residence for an imperial family member who moved to the temple. In autumn, visitors flock to Kozanji to experience the million-dollar view from within Sekisui-in.

Established in 888, Ninna-ji is a temple of great importance — being the head temple of the Omuro school in the Shingon sect of Japanese Buddhism. Ninna-ji..

Ryoanji Temple is home to Japan’s most famous Zen stone garden and one of Kyoto’s most iconic scenes. Believed to be built back in the Muromachi period..