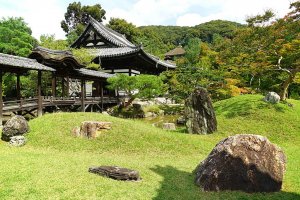 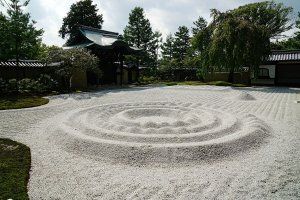 Kodaiji is a superb temple of the Rinzai Zen Buddhism sect. The temple grounds consist of two beautiful gardens, contrasting lush greenery with a sea of raked gravel. At the main hall, or hojo, visitors can see examples of early 1900 architecture and the reconstruction of the once-destroyed hall.

During many seasons, the temple illuminations light up the grounds and gardens to create brilliant plays of shadow and light and spirituality. From mid-March to early May, marvel at the gentle weeping cherry tree illuminated over the gravel garden as if it were at the edge of a silvery lake. Summer welcomes a special night-entrance period to the temple, otherwise impossible; from August 1st to 18th, visitors can wander the illuminated corridors and grounds. From late October to early December, enjoy the brilliant colors of autumn during the final annual illumination. Illuminations run from sunset to 9:30 pm and are not to be missed.

The temple was established in 1606 by Toyotomi Hideyoshi’s widow-turned-nun, Kodai-in. With financial support from Tokugawa Ieyasu, the temple was one of lavish design and decoration, the main hall once being covered in lacquer and gold. After a fire in 1912, the temple was rebuilt to have more subdued and modest features. The temple is no less beautiful despite being rebuilt, and visitors will be treated to some incredible sights.

The gardens of Kodaiji are impressive to say the least. One is a rock garden of raked gravel that represents the ocean. The other is a lush garden designated as a historical site and place of scenic beauty by the Japanese government.

The main hall of Kodaiji was once covered in lacquer and gold. It was rebuilt to be more modest in design after a fire claimed it in 1912. Gardens border the hall on two sides.

This sanctuary is a special memorial hall enshrining Toyotomi Hideyoshi and his wife, Kita-no-Mandokoro (Kodai-in as a nun). The small shrine contains wooden statues of both.

Maki-e is the lacquer technique of sprinkling gold or silver powder on the lacquer while still wet. In the Otama-ya, there are a flight of stairs and small shrines with such beautiful and delicate designs on them. Hanaikada is a Momoyama-Era Important Cultural Property and depicts rafts with flowers upon them, expressing Buddha’s teachings - that everything flows without stopping.

Maruyama Park in Kyoto is a famous place for cherry blossom viewing in spring. Perhaps even the most popular spot in Kyoto, it can become crowded during..

Yasaka Shrine, also known as Gion Shrine, is located in the Gion District of Kyoto. It holds a prominent place in the city, being situated at the end..

Kiyomizudera, or Kiyomizu Temple, is a famous temple on the edge of the Higashiyama district of Kyoto. The temple, whose name translates to “Pure..